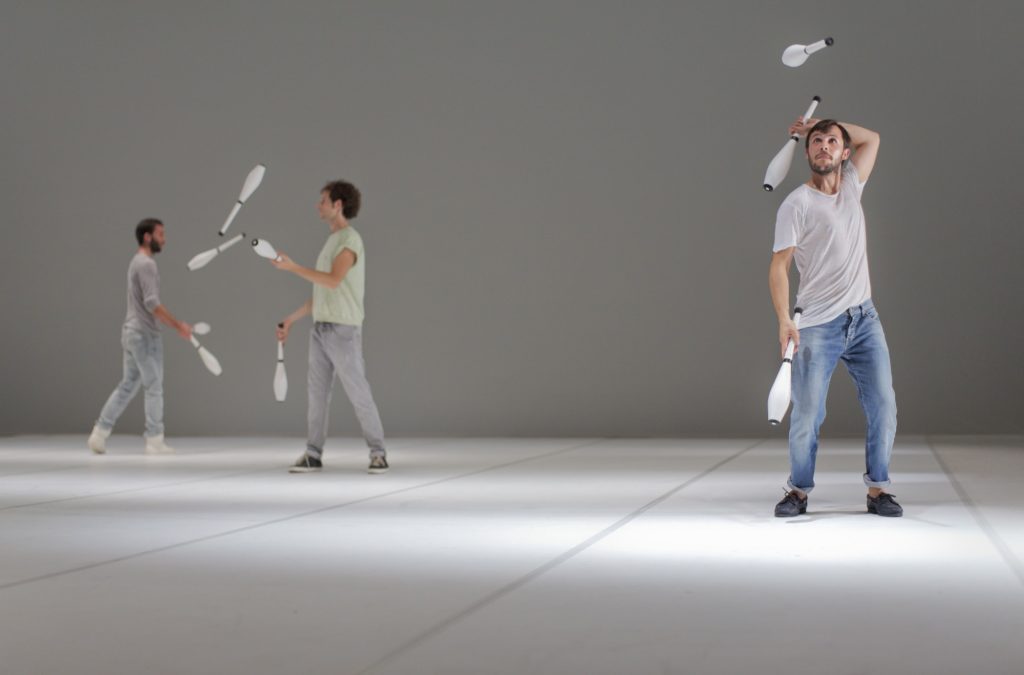 Two months after seeing it, Alessandro Sciarroni’s UNTITLED_I will be there when you die still emerges in my mind on a weekly basis. It is a meditation on precision, discipline and risk featuring four juggling performers. They confidently strut on stage, directly facing the audience.

The white light slowly dims, one count ahead of the imaginary fader that brings the audience’ murmur down to silence. The confidence and ease of the five men walking out on stage make me a little envious. They take their scattered positions and close their eyes for a moment to take the space in before they have to entertain the audience. (One neatly nested on the side of the stage, surrounded by flashy sound tech, is DJ Pablo Esbert Lilienfeld.)

The performance is not unlike a non-denominational ritual. The juggler closest to the audience starts with one pin. Each catch etches a welcome sonic edge against the slowly unfolding electronic soundscape. The other men join in one by one, the individual rhythms of their kinetic trickery syncing and unsyncing. On the edge of the stage closest to each performer, there are preset pins foreshadowing the progression of their work.

And soon they are working with two, three, four pins. I am not exactly sure when the transition occurs in this aesthetically pleasing spectacle. The white stage is a perfect backdrop for the beauty of concentrated bodies possessed by a craft. I watch the pins complete a perfect one-and-a-half turns before neatly folding in the men’s arms. One of the performers (upstage right) simultaneously launches three pins straight up vertically, one spinning near his shoulder, the second neatly above his head and the third one so far up that I have to tilt my neck back. He does it again and again, as if to demonstrate that gravity is on his side.

Sometimes gravity does fail the jugglers. There seems to be an oddly charming staging direction that I witness with pleasure four or five times: acknowledge the moment, give a charming half-smile and pick up the pin slowly. Each missed connection feels like a willing step in accepting failure. Not a demonstration, but an allowance of imperfection. The piece endears but does not entertain in the sense of circus juggling.

And yet, the commercial appeal of the work is there. As the four men walk out, I assess their looks. They are tall, tanned, broad shoulders, tousled hair, t-shirts with the sleeves rolled up showing off biceps, neatly cuffed jeans and styled in pastels straight out of a J. Crew catalog. They are all very attractive, and I’m not sure what to make of it. I enjoy the four handsome jugglers. I wonder whether other audience members objectify them and how much it contributes to enjoying the piece as a whole.

As the show progresses, I notice other sexy stylistic choices. (Sexy in the commercial appeal type of way.) A plastic toy giraffe spinning on the DJ’s turntable set. Strategically placed downstage front light by Rocco Giansante casting yellow, magenta and cyan variations of the jugglers on the white wall behind them. Dim lighting accentuating the sweat and smiles of the performers. I feel like I am aesthetically schmoozed when the piece is interesting enough already. And yet, I love a good spectacle.

Is this a dance performance?

It is a frustrating reminder that the most of the time, the art that leaves the most striking impression is the one that comfortably expands the definition of its medium.

Is juggling an art form?

As an activity, it has fallen through the cracks, all the way to the commodified entertainment circuit of circus shows and geographic variations of America’s Got Talent.

Any time an art form relinquishes its conceptual autonomy to keep the paradoxically singular “audience” smiling in their seats, it’s in trouble. It takes guts to present a stark, minimalist juggling act as a dance performance.

I find myself longing for more after the show. It makes me feel resentful towards my own work, overchoreographed and busy. The four jugglers captivate throughout a full hour by following a simple progression of skill towards the spectacle of nonchalantly suspending five pins in the air. Catch, release, catch, release. I want something more from this work after the applause and subway ride.

So I do as any millennial does. I stalk the jugglers’ Instagram accounts (to no success).

UNTITLED_I will be there when you die is the second piece out of the Will you still love me tomorrow trilogy, having been performed as early as 2013. I can’t find a single social media nugget to satisfy my curiosity about the world on stage.

I also google “juggling club or pin.” I have been calling them pins all along while the Wikipedia article dictates: “juggling clubs are often simply called clubs by jugglers and sometimes are referred to as pins or batons by non-jugglers.”

Yet the program notes say pins. Maybe I was witnessing a non-juggling juggling spectacle. With the beauty, camaraderie and boldness of the jugglers on full display, I’m completely fine with it.